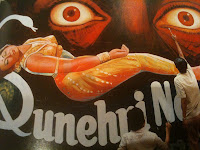 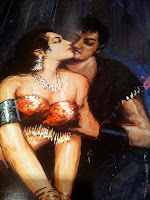 It has been called an independent state of the Indian union, a domain with its own language, customs and codes. The claim is not exaggerated, for Bollywood is indeed an alternate reality far removed from the world we inhabit. It is a land populated with by luridly dressed heroes, leering villains, weeping mothers and simpering heroines; a world with infinitely more music, drama and spectacle than reality could ever accommodate.

Bollywood’s sheer size alone justifies the claim that it is a separate world. Cinema in India has a history almost as long as the history of Western cinema, and currently the country makes the most films in the world, twice the number produced by the United States in a year. The subcontinent’s cultural diversity is comparable to Europe’s: India produces films in 39 languages and dialects, of which at least five have industries larger than most national cinemas. What is generally referred to as Bollywood is the commercial film industry based in Mumbai, which produces films in Hindi, the langua franca understood by viewers across the nation.

Over the years, Bollywood has given birth to a famously hybrid form of cinema that mashes together Indian and foreign influences. For Western viewers accustomed to their own traditions of storytelling, the Bollywood narrative often seems a mere device to present extravagant song-and-dance numbers, high-strung emotion, comic interludes, fights and a host of other elements. This kind of film is commonly known in India as the masala film, after the Hindi word for a spicy mix. Bollywood has evolved many other uniquely Indian genres as well­–mythological and devotional, which draw inspiration from the Hindu epics; socials, which are essentially urban melodramas; stunt films, which are an eccentrically Indian take on the American B movie; and so on.

All these genres feature songs, of course–it seems redundant to call Bollywood films musicals, since songs have been an integral part of almost every Indian film since Alam Ara (1931). While stars sang their own numbers in the initial years, the 1940s saw the introduction of “playback” singers, whose songs were mimed on-screen by actors. The Bollywood sound incorporates many eclectic influences; it has inspired filmmakers to develop their own lyrical styles of picturization and also to think up some decidedly strange song situations: actors have sung songs to pigeons, elephants, traded verses over games of badminton and cricket.

Music is only one of the features that enhance the “repeat value,” or drawing power of a Hindi film. The chief attractions in any Bollywood movie are the stars, who in India command devotion similar to that in the USA. Gossip magazines and national newspapers alike track their every move and every aspect of their personas, from their haircuts to their fluctuations in weight. Their loyal followers tend to watch their films again and again, which is why certain cult films such as Sholay (1975) have run for many years in theaters. For its obsessive fans, Bollywood’s escapist cinema is a highly addictive drug, a habit they can’t shake.

Movie mania runs deep in India. For decades, filmi music was the only pop music in India and the music industry condescendingly referred to non-film music as “private albums.” Today, Hindi cinema’s influence can be seen everywhere, from television, fashion, advertising and the very language of the streets. Its images pervade the visual culture of the subcontinent, leaving their mark on religious prints and street signs alike.

The visual strategy used by Bollywood poster artists to promote the films to mass audiences is dictated by the audience’s taste for paisa vasool entertainment (value for money films) that offer melodrama, comedy, romance and action all for the price of a single ticket. Some posters attempted to put every entertaining highlight from the film on display and to address as many segments of the audience as possible. Instead of searching for a strong, conceptual image, poster artists often throw in many elements as would fit within the space. This train of thought also led to a strategy in which divergent aspects of a film were presented across a set of publicity designs. “Variety,” as one publicist explained, “roused the audience’s curiosity and led them to believe they would get their money’s worth.”

No one comes to Mumbai for rest and relaxation. Brash, chaotic and glitzy, first impressions of the city tend to be dominated by its chronic shortage of space. Crammed onto a narrow strip of land that curls into the Arabian Sea, the city has been transformed from a fishing village to a sprawling metropolis of over 16 million people in less than 500 years. An inebriating mix of India’s movie industry, large colonial relics, restaurants, cricket clubs and a generous mélange of extremes gives you Mumbai: the richest city in India that has the highest GDP of any city in South, West or Central Asia along with real estate prices that are even more exuberant than Manhattan. Mumbai is India’s financial powerhouse and the center for film, fashion and after-dark frolics. Glistening skyscrapers, bridges and malls mushroom everywhere. Even the slums are renovated into sparkling high-rise condominiums and in true Mahatma Gandhi style the previous slum dwellers are given a flat for free. With a pinch of gumption and a dash of adventure there’s no reason not to dive into the warm tranquility of Mumbai and its oceanic air–head or feet first.

Nearly two years after the Mumbai terrorist attacks it was personally gratifying to visit Mumbai including the Jewish Cultural Center, the iconic Taj and Oberoi hotels. The JCC has bounced back (no surprise there) and has been fully restored, along with the Taj and the Oberoi (renamed Oberoi Trident). A lot of money has been spent at all places to make sure they are air tight and safe. After staying at both the Taj and Oberoi – I could see why Pakistani gunmen chose us as targets. A melting point of culture, the JCC and these hotels offer the very best of global culture: people discuss cross-cultural viewpoints everywhere–something that is simply not permissible in Pakistan or in secular Islamic countries. Globetrotters from Britain, Germany, Russia, Sweden and USA are to be seen here along with Indians – and everyone is having lively conversations. The accents are too many for me to know. Security is tight everywhere in India now. Food at these places is also amazing. The most delicious mango ice cream I have ever tasted is at the Taj. Being here you learn there is opulence and indulgence but there is also real experience.
Posted by Saurabh Sharma at 8:11 AM 1 comment:

The Living Gods Of Delhi 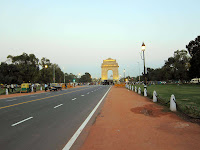 After thirty years in exile, the time was right to set out for New Delhi (Dilli), in the land of the Gods, to encounter the reality of experience and the collective consciousness of a system of belief that is unique in its cultural context to India. Delhi is one of the oldest cities in the world and it has witnessed the history of India during the last 5000 years. Over the millennia, the city is said to been built and destroyed seven times and remnants of the past survive harmoniously with skyscrapers, residential colonies and bustling commercial complexes.Among the vast wealth of ancient monuments, Delhi has the India gate, parliament buildings, the Qutab Minar, and the Red Fort–a 17th century fort encompassing grand halls where legendary Peacock Throne once stood, representing the zenith of Mughal creativity.Today, here at the India’s capital, ambition and drive are important for the people’s success in life regardless of their social background. At the same time, it is essential to have fun and to grow as an individual in the Karma spirituality of the region.
Posted by Saurabh Sharma at 7:45 AM 1 comment: 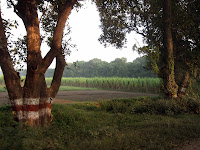 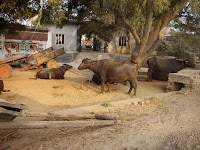 As the sun rose, I was able to witness picturesque scenes of rural village life. This was the real India: agrarian people preparing for the day, happy cows being washed and milked, children waiting for the school bus, a young boy playing with his young calf, bored village policemen reading newspapers and numerous farmers taking produce to the market on tractors, horse, buffalo or camel. Of course, as I neared Saharanpur things got even more interesting. I saw many religious devotees walking for miles carrying red flags to the temple. Activity of all sorts were taking place on my way to Saharanpur in Uttar Pradesh.

For decades, Saharanpur was vintage old India. A place where my Grandfather had a family clinic, a romantic town where my parents grew up, where my cousins still live and where we have a house affectionately named Saurabh’s cottage. In and around Saharanpur are farms growing sugarcane, wheat, barley, okra, mangoes, guava and maize. The town is also known for its artistic woodcarvings. Economists and government officials have long acclaimed India’s rural cities as new fountains of prosperity and incubators of India’s growing middle class. Cities like Saharanpur, Pune, Gurgaon and Aurangabad are thriving centers across India’s more prosperous states. In rush hour traffic, Saharanpur felt crowded with people hurrying home from work in cars and motorcycles or hustling to the market for shopping on scooters or tanga (horse and buggy). “There are many cities where Indians have money but are not indulging in luxury–they are always in savings mode,” says Debashish Mitra, head of sales and marketing for Mercedes-Benz in India. “But now that is changing. People want to spend and feel they deserve luxury.” Older men like Ashish Garde, who runs Nirlep, a company that has made nonstick pots and pans here since 1968 said the millions spent on luxury cars would have been better spent on investments in industries that would create jobs or donations to charity. “Those who get quick money, their relationship is different,” Mr. Garde said. “After globalization things happen very easily.”
Posted by Saurabh Sharma at 7:43 AM No comments: 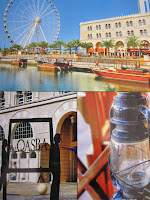 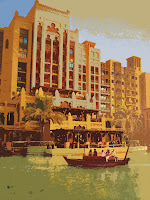 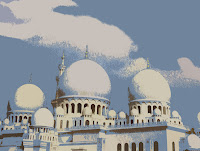 Dubai is the cultural hub of United Arab Emirates-a flourishing new city that is part shopping oasis and part fantasy land. The city has always offered world-class duty free shopping and now includes international cuisines and five star resort hotels including the Armani on the 8th floor of the Burj Al Arab. Everywhere you look high rises are being built and vast amount of property is for sale. In Dubai, the local folklore claims, 'everyday is an opportunity.' The Emirate, which has a strong tradition for horse racing now hosts the world's richest horse race known as the Dubai World Cup, which is now worth $10 Million for the winner and takes place annually in March. The town for luxe living, Dubai is filled with pristine architecture, private pools, spas, fitness centers and beaches. The grid and glamour of Formula One Grand Prix now includes Dubai as well with races taking place November 12 - 14th on the Yasmarina circuit.
Posted by Saurabh Sharma at 7:37 AM No comments: