By adhering to his own code–maintaining focus, but never following the herd–Sean Connery was able to breathe new life into Ian Flemming's vision of post-war spy novels. In doing so, the Scottish actor became Hollywood's most sought after leading man, earning an Academy Award for "The Untouchables" in 1988 and knighthood from Her Majesty the Queen.

On playing Bond: "If it means I have to stay in character when the cameras are not rolling, then I will. If I have to read one line 1,500 times, then I do that."

Sean Connery made the character of James Bond his own, blending ruthlessness with sardonic wit. He revolutionized the world with his gritty and witty portrayal of the charismatic secret agent. RIP Sir Connery. "The name is Bond... James Bond." 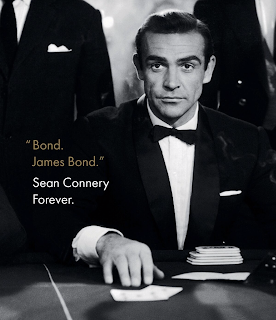 Posted by Saurabh Sharma at 12:35 PM No comments: